Swing Voters in Michigan Say They Will Vote For Trump, Biden a “Puppet” Who’s “Not Mentally Capable of Being President” (VIDEO)

The Presidential election is only 99 days away. Both candidates have been sidelined by the restrictions on gatherings as a result of the “virus’.

With technology though, there have been some online rallies, press conferences, and speeches to their voting base. Even though highly scripted, especially on the democratic side, the public has seen some things which might sway the election when it’s time to make the choice, behind the curtains.

Even though Joe struggled during the debates and live appearances until the shutdown, the party establishment coalesced around him anyway. But not the Bernie Sanders faithful who can’t accept for former VP, for numerous reasons.

Bernie Sanders co-chair: Voting for Joe Biden like eating ‘half a bowl of s–t’ 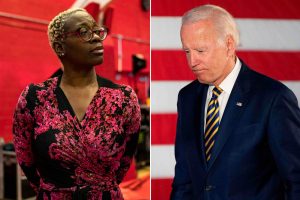 A co-chair of Bernie Sanders’ presidential campaign vividly described how she feels about choosing between Biden and President Trump — likening it to only having to eat half a bowl of excrement.

“It’s like saying to somebody, ‘You have a bowl of s–t in front of you, and all you’ve got to do is eat half of it instead of the whole thing.’ It’s still s–t’, ” Sanders co-chair Nina Turner told The Atlantic.

In spite of the democratic parties attempt to hide the declining mental state of their presumptive nominee, Joe Biden, more undecided voters are expressing their inability to vote for him because of his health issues.

Swing voters in Michigan say they will vote for President Trump in the November election because they believe Biden is a “puppet” who is “not mentally capable of being president.”

The Axios focus group included nine swing voters in Michigan who voted for Barack Obama in 2012, but voted Trump in 2016.

One swing voter expressed his concern over Biden’s cognitive decline.

‘Biden is showing signs of dementia and would likely become a puppet — controlled by a lot of people in the Deep State,’ a voter named Matt T said, describing Biden as “up there in age.”

Jeff O said he’s picking Trump because “I don’t think that Biden is mentally capable of being president.”

“I just feel that what he’s saying is not making any sense to me,” said Sharon T. of Biden’s live streams. She also called Biden “a puppet” for wearing a face mask in public.

Who really knows where the race is at this point.

I do know, Joe Biden will not be the President, even if he is elected.

I believe the policies and decisions would come from his handlers until he resigns, allowing the first woman, his VP, to assume the Presidency. Would the United States Of America really do this to its self?