by Kari Donovan
in Military, National, US Constitution, Video
0 0
1

Two cousins who are both the 4th great-Grandchildren of Betsy Ross met for the first time recently at the American Revolution Museum in Philadelphia, just in time for the 245th remembrance of the Declaration of Independence. One Cousin had just donated a newly discovered Diary with details about Ross’s life and marriage.

Betsy Ross is the iconic figure known to Americans as the person who is responsible for the “Betsy Ross Flag”.

Diary Recounts Claypoole’s Harrowing Experiences as a Prisoner of War. The Diary is Now on Display at the Museum Alongside Claypoole’s Sea Chest.

According to a Press Release from the Museum of The American Revolution:

Discovered in a shoebox in a Northern California garage, the long-lost Revolutionary War diary of John Claypoole is now on display at the Museum of the American Revolution in Philadelphia. Claypoole was the third husband of Betsy Ross, the seamstress and upholsterer who has long been celebrated by many as the creator of the first American flag.

Claypoole’s handwritten diary, which includes letters and songs he transcribed, was written during the years 1781 and 1782 and later published in the late 1800s, but its location has been unknown to scholars for nearly a century. That is, until Aileen Edge and her husband David discovered it last year as they cleaned the garage of Aileen’s mother, Claire Canby Keleher, a descendant of Ross and Claypoole, who passed away last summer. The small, unassuming book was wrapped in beige paper and tucked into a box beneath bundles of family letters from the 1950s.

“Discovering the diary was like something out of a movie. I felt like the world stood still as I realized what I was holding in my hands – something that was connected to beginning of our country. It’s a miracle that it survived,” said Aileen Edge. “We donated the diary to the Museum because we wanted it to be appreciated and enjoyed rather than hidden away for decades more. I also wanted to pay tribute to my mother and uncle for keeping this family history alive.” 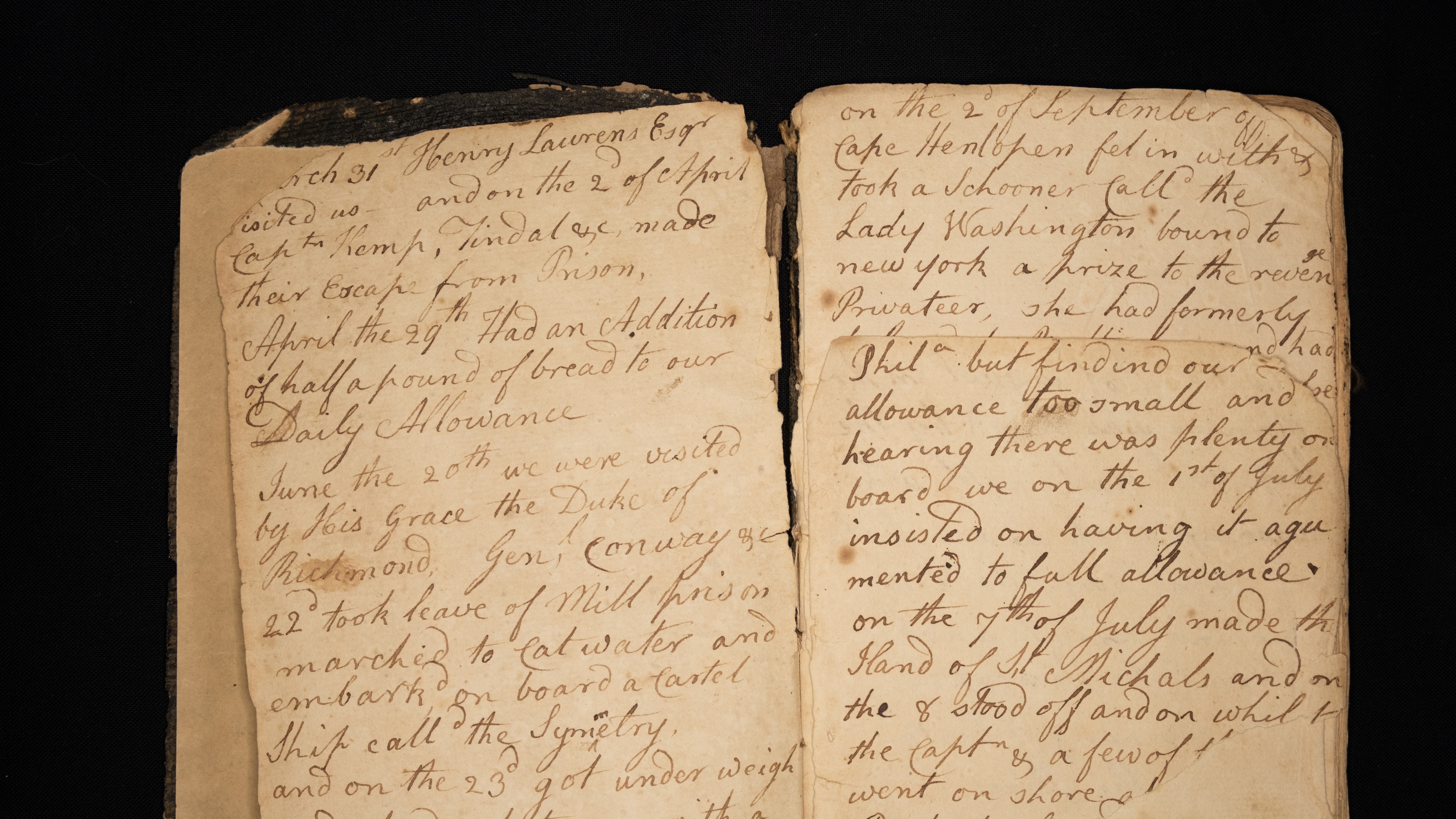 The diary documents Claypoole’s experiences as a prisoner of war after the British captured his American privateer ship off the coast of Ireland during the Revolutionary War. Claypoole was imprisoned with other American sailors, first in Ireland and then at the notorious Old Mill Prison in Plymouth, England. In the diary, Claypoole reports being with Ross’s second husband, Joseph Ashburn, also a prisoner of war, as he died. Claypoole later traveled to Philadelphia and told Ross the news of her husband’s death. They married shortly thereafter. They were married for more than 30 years and are now buried together at the Betsy Ross House in Philadelphia, just a few blocks from the Museum.

“Betsy Ross’s name is shrouded in mythology, but this diary allows us to glimpse the real world of crises, trauma, fear and uncertainty that she and Claypoole endured, shining a light on the real, personal cost of war,” said Dr. Philip C. Mead, Chief Historian and Curator for the Museum. “As we approach Independence Day, it’s important to consider the sacrifice and hardship that people endured as they created a nation that had a very uncertain outcome.” The diary is now on display alongside Claypoole’s wooden sea chest.

Just in time for the Museum’s Fourth of July celebration, the diary is now on display in the Museum’s “War at Sea” gallery alongside John Claypoole’s wooden sea chest, which was gifted to the Museum in 2019 by the Balderston family, another branch of the Ross and Claypoole family.

“These two branches of the Ross/Claypoole family were not aware of each other. We were able to reunite them at the Museum at the same moment that we reunited John Claypoole’s personal items for the first time in at least a century – it felt like witnessing two family reunions,” said Mead.

Although not mentioned in the diary, Claypoole was a member of one of the first publicly recognized societies dedicated to anti-slavery principles in American history. “Claypoole, like many others, saw the paradox of a country founded on the ideals of the Declaration of Independence but practicing the tyranny of slavery,” said Mead. “Claypoole’s story demonstrates that there were many people who were involved in the Revolution beyond those we learned about in school, and that some of those people actively sought to expand the Revolutionary promise of equality by working to end slavery. There are no ordinary lives and every one of these stories tells us important details about who we are as a nation and who we want to be.” 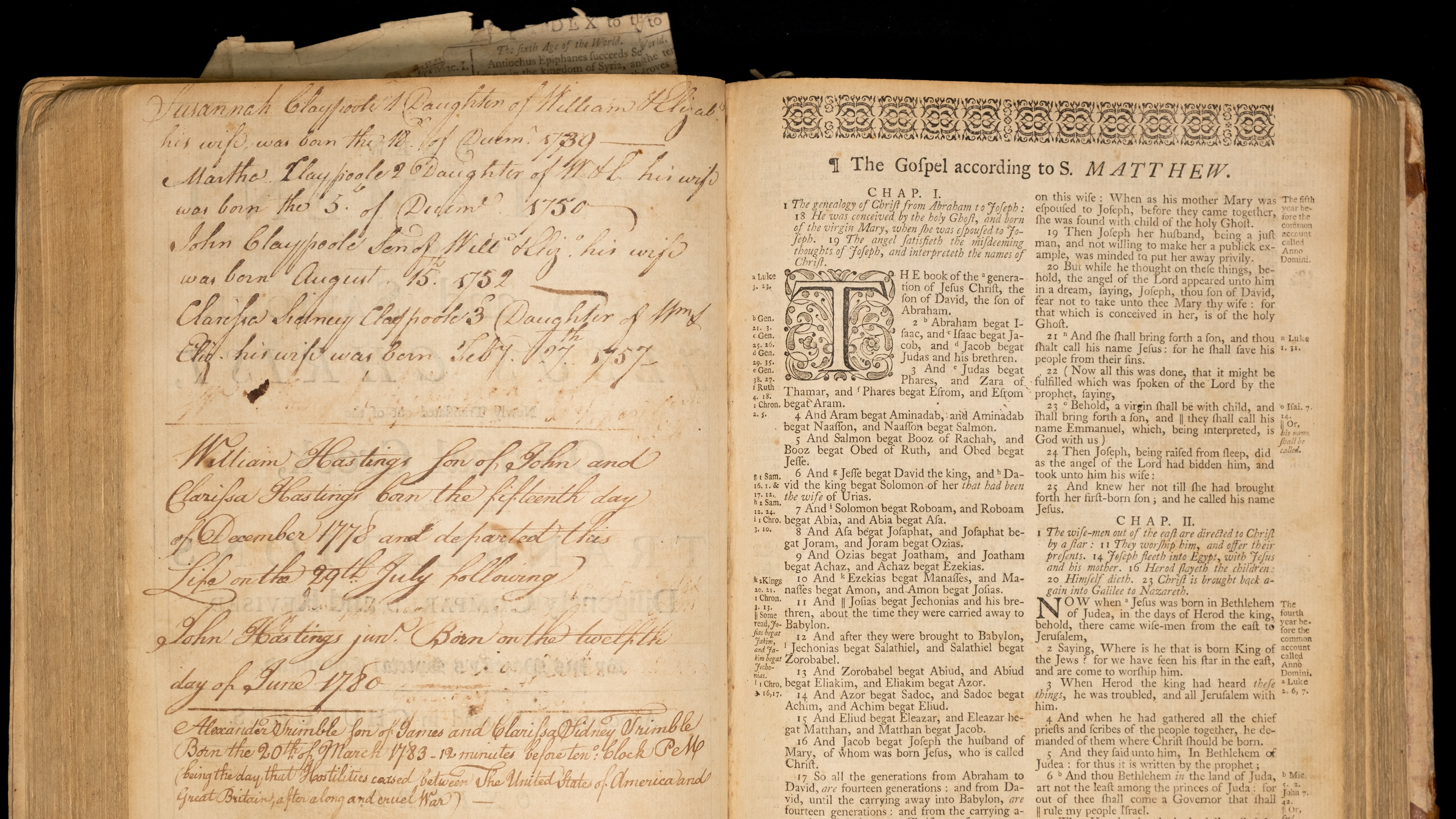 The Edge family also donated a family Bible to the Museum of the American Revolution that originally belonged to Elizabeth Claypoole, John Claypoole’s mother. The Bible documents the births of Ross and Claypoole’s children as well as including the following inscription that documents the marriage of Ross and Claypoole: “John Claypoole & Elizabeth was married the 8th day of May in the year of our Lord 1783 and in the 8th year of Independence of the United States of America,” revealing just how closely tied the identities of Ross and Claypoole were to the creation of the nation. The Bible will require conservation before it can go on display, but the Museum is developing plans to display it.

“Elizabeth ‘Betsy’ Ross continues to be a compelling figure in American historical memory,” said Dr. R. Scott Stephenson, Museum President and CEO. “We are indebted to our good friends at Historic Philadelphia, Inc., who operate the Betsy Ross House, for keeping her memory, and that of her extensive family, alive.” During the month of July, visitors to the Betsy Ross House can bring their ticket stub to the Museum for $2 off admission (offer available only at the Museum’s front desk).

About Museum of the American Revolution
The Museum of the American Revolution uncovers and shares compelling stories about the diverse people and complex events that sparked America’s ongoing experiment in liberty, equality, and self-government. Through the Museum’s unmatched collection, immersive galleries, powerful theater experiences, and interactive elements, visitors gain a deeper appreciation for how this nation came to be and feel inspired to consider their role in ensuring that the promise of the American Revolution endures. Located just steps away from Independence Hall, the Museum serves as a portal to the region’s many Revolutionary sites, sparking interest, providing context, and encouraging exploration. The Museum, which opened on April 19, 2017, is a private, non-profit, and non-partisan organization. For more information, visit www.AmRevMuseum.org or call 877.740.1776.

Here is a great video story about the diary:

Opportunist, Selfish And Self Centered US Woman’s Soccer Team Turns Back On 98 Year Old Veteran