Documents: North American Connections to The Communist Party, Trudeau May Have Given China Military Power in Canada

Ezra Levant broke a story on Wednesday that should shock Americans and our allies, because if true, the Chinese Communist Party has military access to North America, and possibly control of some energy sectors, as well as technology to spy upon people.

“If anyone doubted Justin Trudeau’s dedication to aiding & abetting the CCP, this is the wake-up call. If he’s delusional enough to think he’s going to be a partner in the regime he admires, he needs to be permanently institutionalized ASAP,” one Canadian wrote in response to The Rebel’s story of massive betrayal by Justin Trudeau.

Ezra Levant posted on Twitter that this story was the “biggest scoop he ever had,” which was exposing some legal documents he had gotten from the Canadian government that was surprisingly not redacted well enough to cover the print.

Trudeau sent nearly 200 CAF personnel to Wuhan in October of 2019 to participate in the Military World Games, a propaganda bonanza for China diplomatic reports that China is using its “belt and road” negotiations to demand that countries drop human rights complaints if they want trade deals,” possibly explaining why American politicians seem to blind to Civil Rights violations against American citizens.

This is only one of many bombshell revelations in The China Files, a 34-page access to information document released by the Trudeau government to Rebel News, seen below.

Documents that normally would have been completely blacked out by government censors were instead greyed out — the documents remain completely readable. Rebel News has chosen to black out a very small portion that would otherwise compromise the safety of an individual.

* Bureaucrats bizarre protocol of referring to accused fraudster and Huawei CFO Meng Wanzhou as “Ms. Meng”, but refusing to even mention the two Michaels by name 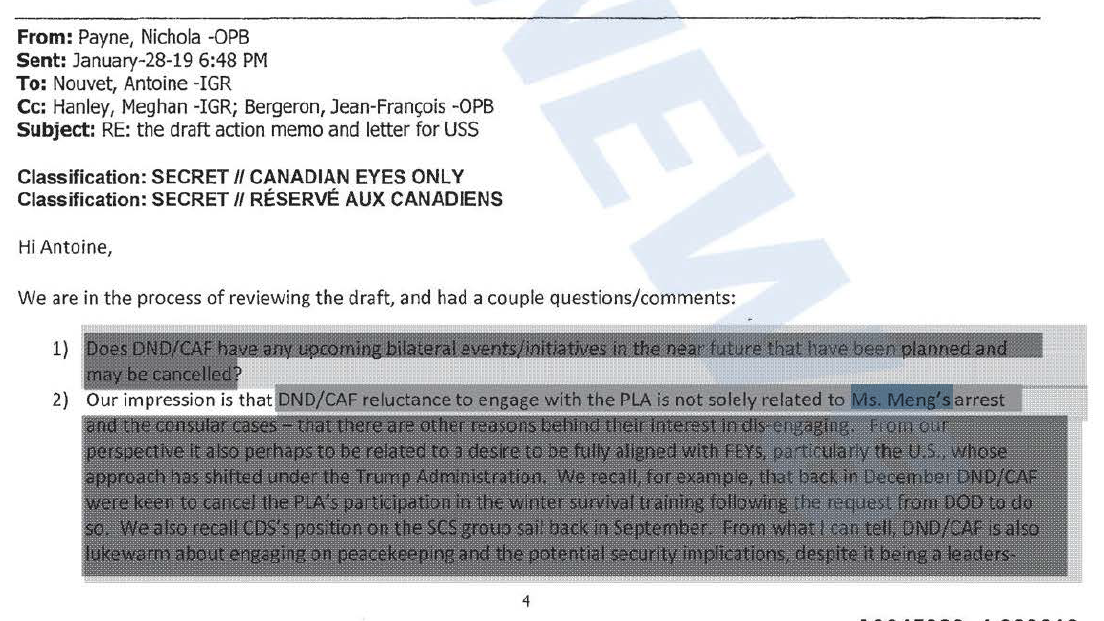 Visit Rebel News for the rest of their story.

Reaction from Australia was that Trudeau is a threat.

A reader of the post submitted a news story that is a winding tale of Canadian Military drills with the Chinese, corporate greed, and their connections to the murder of a Chinese woman, who apparently had been brutalized and then left dead, at the hospital for her siblings who worked there, to find her, in what appears to be a signal for them to be intimidated.

At the home of the murdered woman were signs of connections to ongoing visitations from Chinese Military Units in Canada.

As tensions between the United States and the Chinese Communist Party, Military units’ stories on the North American continent should be alarming, so The Rebel’s story should be evaluated for National Security threats to the United States.

John Eastman Files with SCOTUS for Trump to Intervene with Texas, Campaign Statement and Filing

Left’s Terror: “Something Has To Be Done Before 2022”, Trump Said On OANN