The state director of elections in Arizona, Sambo Dul, is a former employee of Perkins Coie, who is the exact same group at the center of advocating for changing key voting laws in key states in the 2020 Presidential elections.  Dul is also a long-time advocate for resettlement causes for immigrants and refugees to the United States.

To people with integrity and respect for Americans, that is called a “conflict of interest” and looking at her sort of flippant approach to American Civil Liberties and the seriousness of her position with the Secretary of State, in a state that is in the middle of a serious explosive audit, her behavior should be scrutinized.

So if it is confusing for Princeton educated Dul, here is the Oxford Dictionary definition of the phrase:

“the conflict of interest between elected officials and corporate lobbyists”

Here is Sambo Dul’s resume, where you can clearly see the connection to Perkins Coie:

Dul pushes for “voting rights” for immigrants, using her positions to expand access to American elections for noncitizens:

CLE OFFERED*
AWLA AND AAABA jointly present this Voting Rights CLE. Happy Hour appetizers and cocktails are included in this FREE to AWLA Members event.
The State Bar of Arizona does not approve or accredit CLE activities for the Mandatory Continuing Legal Education requirement. This activity may qualify for up to 1 hour toward your annual CLE requirement for the State Bar of Arizona, including 0 hour(s) of professional responsibility. 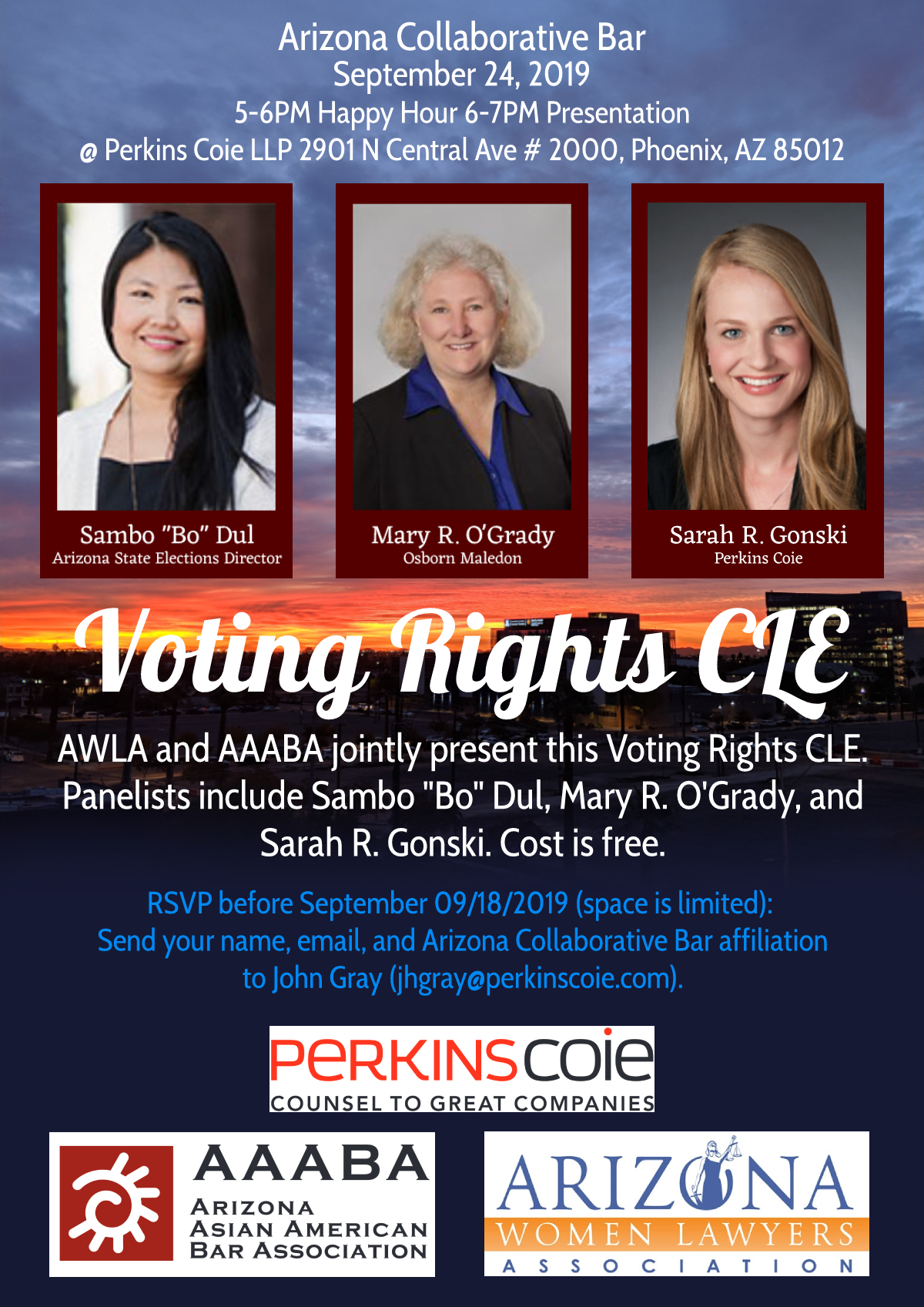 Dul’s connection to the suspicious law firm, Perkins Coie, should be heavily scrutinized at this point because of the involvement of that law firm in the 2020 Presidental election.

Perkins Coie is represented by the notorious Marc Elias, who was integral for the schemes that usurped the legal authority of State Legislative bodies in numerous states and pushed for changes in election law without the consent of anyone but friendly radical Democrats.  Elias and Perkins Coie are the exact people responsible for the tsunami of confusing and corrupted Absentee Ballots and the laws which elevated those ballots, which handed Democrat Joe Biden a “victory” in the 2020 Presidential election.

Elias has numerous lawsuits against the audit teams and State senators in Arizona to protect his work in that state. That alone should be a conflict of interest for Dul.

I have covered Marc Elias’s actions numerous times.  Apparently, he doesn’t appreciate my coverage. Elias has blocked me on Twitter, however, I am still aware of his many usurpations of the law and his corrupt pursuit of invalidating the voices of eligible voters.

I was able to find that on his timeline is his plan to cause some more trouble for the United States of America, perhaps with his comrade, Sambo Dul?

Dul has been strangely quiet on social media and in the news about what is happening in her state.

IS IT TIME TO GET TO WORK YET, DUL?

The audit in the state was believed, for many months, to show major fraud. Bobby Pitton has been posting about his findings for months. Sul has said nothing.

a vote cast in their name.

Yet other Fraudulent Votes were likely "added" to the files from other Counties within the State.

Dul seems to be refreshed, according to her Twitter timeline,  and ready for something to happen. Perhaps she will get off the beach soon? She posted about a “procedures Manual meeting,” perhaps to address the 2019 election manual for the State?

Dul’s recent posts show her mind is on her advocacy work.  That may explain why she appears to be too busy to notice there is something big happening in her state called an “audit.”

I’m matching @LarryLSandigo, @Will_Gaona & @katiehobbs’ donations to @PlanPhoenix – my family immigrated to AZ in 1988 & have been @Suns fans since & I ❤️ PLAN’s work serving & keeping immigrant families together. Will you join me? #rallythevalley  #rallyforfamilies #rallythevote https://t.co/r07KqH9m2z

Going Down a Rabbit hole:

Dul worked closely with Elias before her position as the Secretary of State.

Sambo Dul is the director of elections for AZ. However, before she worked for Hobbs, she was at Perkins-Coie where she worked 2nd chair to Marc Elias in defending American Bridge, Soros, Clinton Foundation, and Media Matters from RICO charges

ARIZONA REPUBLICANS WERE ON TO THE SCHEMES FROM 2019

The 2019 Manual was the focus of an interesting article, showing that Republicans were ahead of the game.

A well-intentioned bill has been introduced in the Arizona Senate to ensure the Secretary of State’s Election Procedures Manual does not stray from statute.  But injecting the Governor’s Regulatory Review Council into the Manual’s review and approval process might be a cure worse than the disease.

According to a recent story by Capitol Media Services, Senate Bill 1014 was crafted to rein in the Secretary of State from including provisions in the draft Election Procedures Manual that may violate Arizona statute. The specific provision that touched off the controversy would require county election officials to count an unsigned early ballot if the voter cured the deficiency within 3-5 days after election day.

Under current law, the Manual is drafted by the Secretary of State (in consultation with county election officials) and must reviewed and approved by the Attorney General and Governor. SB1014 would remove these officials from the process in favor of the Governor’s Regulatory Review Council or GRRC, which normally reviews other agencies’ proposed rules. According to the story, GRRC is the proper counterweight because “the council would be able to quash any changes that members believe go outside the legal authority of the secretary of state.”

Marc Elias, on behalf of Perkins Coie, has been pursuing changes there to the election laws, demanding to go around the legal process for a long time.

The US Supreme Court ruled  at the beginning f July in way that smashed Elias’s work in Arizona. But Elias is determined still.

Tomorrow would be a great day for Justice Alito to write the 6-3 majority opinion in Arizona v. DNC and send Marc Elias & Stacey Abrams home crying.

MORE TROUBLE ON THE HORIZON

Perhaps illegal because what they did was not in the manual?

Check this out from AZ central:

“Arizona Attorney General Mark Brnovich’s office has asked Secretary of State Katie Hobbs for potential evidence of illegal voting — a move that counters her request that he investigate a pressure campaign by former President Donald Trump’s allies to “stop the counting” last year.

The attorney general’s email response pointedly notes that Hobbs, a Democrat, hasn’t submitted referrals for double voting. It marks the first time in more than a decade a secretary of state has not done so.

The Hobbs administration is waiting for a report from a national organization that works with states across the nation to help identify potential incidents of double voting, a spokesperson for Hobbs said Friday.

The email, sent Wednesday to the Secretary of State’s Office and obtained Friday by The Arizona Republic, was sent by Jennifer Wright, an assistant attorney general who focuses on Brnovich’s election integrity unit.”

This is a good start but I seriously want to know the intentions of the Arizona AG in regard to seeking truth about the findings thus far of the #ArizonaAudit. I suspect much of the American public want to know as well.
@GeneralBrnovichhttps://t.co/zQiBj6O5EC

Perhaps Dul will be defending her buddies from a RICO charge soon?  She is in the middle of a massive conflict of interest. Is anyone else noticing that?