This Is How Maryland Is Normalizing Children Voting, And How Dems Will Slip It In HR1 for 2022

Most Americans are not getting adjusted to the idea that Democrats plan to transform the United States of America as fast as possible, and much of their agenda depends on capturing and maintaining political power in the 2022 races. That is why they are rushing to change voting laws with a Bill in Congress, one that includes letting children vote, according to one man.

“New in the election integrity space is the issue of children voting and even having more political power than adults. This is the central issue of our new case against the Howard County School Board. The County’s election process allows children to vote for a student member of the school board.  This case matters because it is part of a nationwide effort to normalize child voting, as unbelievable as that is.” J. Christian Adams, PILF President.

H.R. 1 would make it more likely for minors to be illegally registered to vote by various vote-expansion changes. See here, here, and here for coverage by The Federalist of this radical federal elections bill.

“The left’s next move is to infantilize voting,” said Bowman. “They want to lower the voting age to 16, and now in Maryland, they have sixth-graders voting. We have a voting age for a reason.”

Bowman provided an example of how having a minor participate in critical government decisions can have major repercussions on society.

“The board voted for re-opening [schools] and the eighth vote that made it tied, which caused the school not to reopen, was a student,” the spokeswoman noted.

“Democrats talk about H.R.1 the “For the People Act” as if it’s a civil rights bill. It’s not. It is a federal takeover of elections designed to cement Democratic election success in the future, including letting children vote, and this is how they are going to start,” Adams told talk show host Hannity on Friday.

Adams has been making appearances this month in numerous interviews to warn people that what Maryland is doing by normalizing children voting for a local school board position will impact the massive Bill to transform federal elections called HR1 and all federal elections, so it is worth taking the time to understand his concerns.

“You can’t allocate political power where you give children more power than adults on a school board,” Adams said.

Adams has a group called Public Interest Legal Foundation (PILF). This week, PILF filed a lawsuit against the Howard County School Board for letting Children vote in school board elections. According to school documents,  Public school students in grades 6-11th are eligible to vote for a fellow student to sit on the school board in Howard County.  PILF’s lawsuit alleges that this election and governance scheme violates the 14th and 1st amendments of the U.S. Constitution. 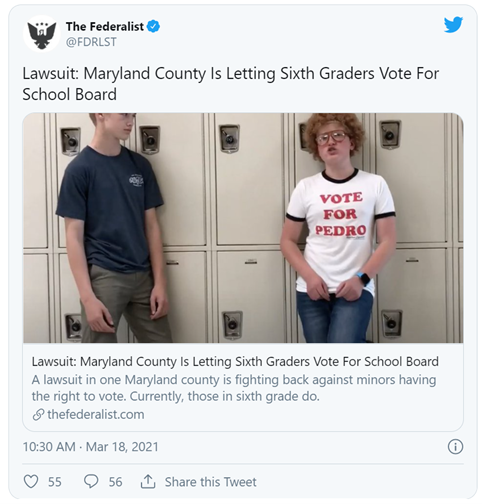 YES, THIS IS HAPPENING IN AMERICA
According to the Federalist article on the lawsuit:

“The suit alleges that the student-member process of only allowing minors to run violates the Fourteenth Amendment’s Equal Protection Clause. This is because adults are not given an equal opportunity to have a say in this individual’s election to represent the county. The suit also employs the Equal Protection Clause to allege that teachers who can wield power on which students will be selected via the process are unfair.“They’ve created a preferred class of voting for the students over the adults,” PILF spokeswoman Lauren Bowman told The Federalist. “The teachers are in control of the process and the nominations, and even the elections. We don’t even know how they are really counting all the votes.”

Bowman provided an example of how having a minor participate in critical government decisions can have major repercussions on society.

“The board voted for re-opening [schools] and the eighth vote that made it tied, which caused the school not to reopen, was a student,” the spokeswoman noted.