Who Is Leading the USA? Full Video Of Joe Biden, As He Appears To Take A Nap During A Diplomatic Meeting

Democrat Joe Biden appears to have fallen asleep, at the White House, in the middle of a diplomatic meeting with the Prime Minister of Israel on Friday. At the same time, the Prime Minister talked about his concerns about ISIS being at the country’s border and threatening their lives.

“You and I are a lighthouse in a very dark storm,” the Prime Minister said to Biden. “The credit goes to Barack Obama,” Biden responded at the end, as if he had not heard a thing that had just been said.

The meeting the sounds of the media being shuffled out while Biden, as typically refused questions.

During the entire 15 mins, speech Biden shifted in his seat and appeared to be restless as if trying to keep himself awake. Then, almost as if to prepare himself for the eventuality of nodding off, Bidenopened the day’s remarks as he tried his new maneuver of appearing to be bowed in pensive thought- or to be consulting his notes on his lap.

And at one point did appear to be asleep.

At another point, as seen on the longer film, the camera awkwardly panned in close on the Prime Minister and left Biden off the film altogether, perhaps hiding another Biden nap.

CSPAN carried the event and described it as:

President Biden welcomed new Israeli Prime Minister Naftali Bennett to the White House and asserted the United States‘ support for Israel. The two leaders outlined the topics they would cover in their bilateral discussions, including the COVID-19 vaccine and booster shots and Iran’s nuclear weapons program. The president began his remarks by briefly discussing the deadly attacks at the Kabul airport, saying the loss of life was “tragic” and calling the military’s efforts a “worthy mission.”

CNN reported on the event:

“When Israel’s prime minister visited the White House on Friday, for the first time in 12 years, it was someone other than Benjamin Netanyahu.

That alone lent the talks a sense of renewal, even though stark differences remain between President Joe Biden and his new Israeli counterpart Naftali Bennett. 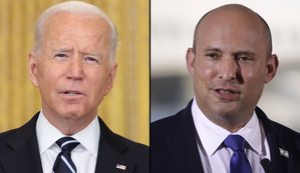 Biden looks for air-clearing in the first meeting with Israel’s new leader.
“I bring with me a new spirit,” Bennett said in warm remarks from the Oval Office as the meeting was getting underway, “a spirit of good will, a spirit of hope, a spirit of decency and honesty, a spirit of unity and bipartisanship, of folks who — as you suggested — harbor very different political opinions, even opposing, yet we all share the deep passion to work together to build a better future for Israel.”

The strange behavior of Biden did not stay hidden from the public, however-

Meme makers had some fun with the shocking moments where the most powerful man in the world appeared to be asleep at a time of heightened crisis.

The news of Biden’s nap during the visit went viral over the weekend to symbolize Biden’s inability to lead the United States, especially during the perilous times we are faced with currently.

Leftist Loudon County Wants to Suspend Maskless Kids, But Not a Transgender Rapist