by Steven Ahle
in Military, Politics
0 0
4

A recent Revolver News investigative piece coined the term “Counter-American Intelligence” to describe the systematic counter-intelligence operation that is meant to weed out conservatives from the National Guard and eventually the US military.

They have already fired a number of the National Guard. Two were fired for what is called inappropriate posts on social media.  Ten more were lot go for other reasons.

The FBI uses the powerful “Babel Street” social media panopticon software. The software inspects 25 social media sites and can translate 200 languages. But, what happens if you purge all of the conservatives from the service? Name one famous Democratic general.

For the record, Robert E Lee was a conservative but most of the Southern generals were Democrats and they lost the war.

Along with bragging about the high-profile clients they have like the FBI, the military’s Special Operations Command, and the Australian Attorney General’s Office, they include a list of the exact capabilities, explaining the depth and efficacy of Babel Street’s software.

Babel X has access to over 25 social media sites, including Facebook, Instagram, and to Twitter’s firehose… Babel X can also surveil millions of URL’s including the deep web.

The software can instantly translate over 200 languages, and can set up geo-fences around areas of special interest, and has highly customizable filtering options including for hashtags, emojis, handles, names, and keywords. Users can also filter for numerical sequences like credit card or social security numbers.

Babel Street’s filtering options are extremely precise, and allow for the user to screen for dates, times, data type, language, and—interestingly enough—sentiment. Their website includes a short paragraph on this sentiment aspect which claims that they “possess the most sophisticated sentiment analysis tool on the market.

Derived from collaboration with top university linguistic programs, Babel Street boasts the ability to evaluate sentiment in 19 languages—far exceeding the capacity of any other competitor. [VICE] 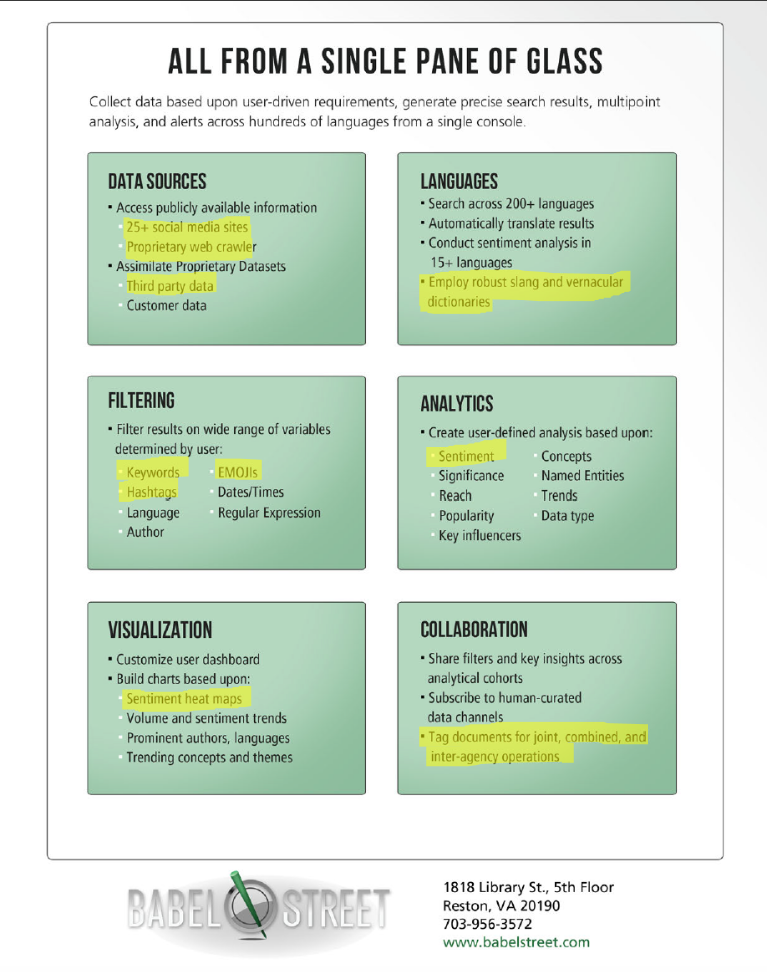 Biden Floats Silly Plan To Save The Country From Inflation