Republican Sens. Chuck Grassley and Ron Johnson claim they have proof that Hunter Biden received $100,000 dollars from a company tied to the Chinese government. This new revelation comes out as the GOP Senators are reviving their investigation into Hunter Biden’s foreign entanglements. Grassley, an Iowa Republican, shared two images that showed an August 2017 $100,000 wire transfer from CEFC, the Chinese government-controlled energy company. They produced copies of the wire transfers that show the money going to Owasco,’ a Hunter Biden firm. 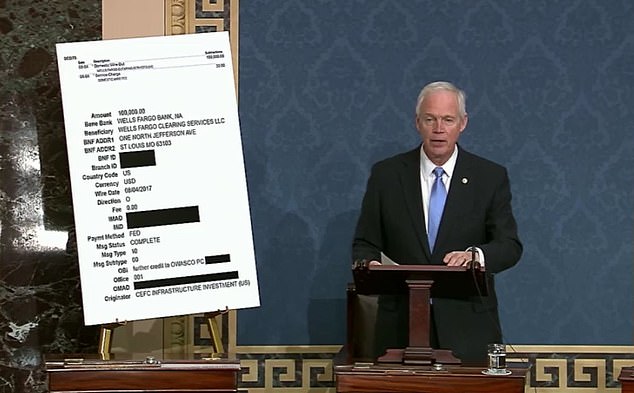 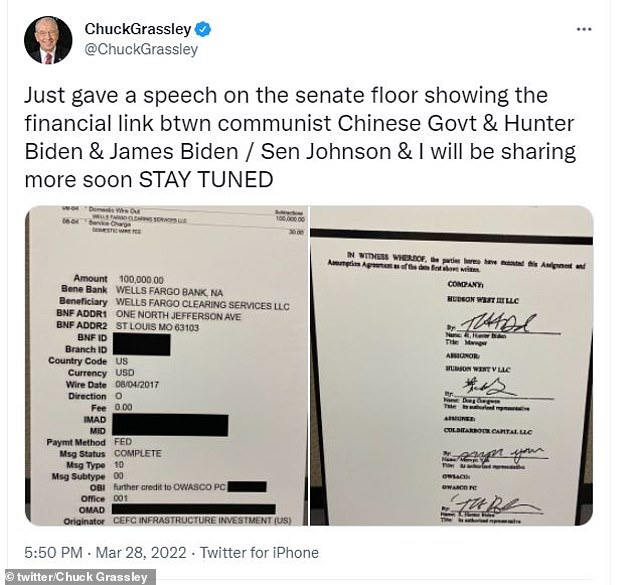 “Sen. Johnson and I will produce new records to show additional connections between the Biden familiy and the communist Chinese regime,’ Grassley announced. ‘Our report exposed extensive financial relationships between Hunter and James Biden and Chinese nationals connected to the communist regime.”

“Over the next few days, Sen. Grassley and I will come to the floor to present additional evidence that has not yet been made public,’ Johnson said. ‘These records show extensive connections between the Biden family and elements of the Communist Chinese regime – we’re talking high-dollar transactions.”

“But our speeches will introduce new financial documents into the record for all to see.”

From The Daily Mail

Grassley and Johnson previously produced two reports, one in September 2020, before the election, and one in November 2020, after President Joe Biden had been elected, that revealed ‘millions of dollars in questionable financial transactions between Hunter Biden and his associates and foreign individuals with ties to the Chinese Communist Party and Russian government.’

At the time, the reports were largely characterized as a partisan takedown during an election year.

The reports were made public around the same time The New York Post reported the existence of Hunter Biden’s laptop, which the Biden campaign labeled Russian propaganda.

Senator Johnson said that as they delve through more and more of the financial documents, it demonstrates just how compromised Joe Biden is by China. If this were Trump the Democrats would be screaming impeachment.