I would not be shocked if Sen Kyrsten Sinema runs for reelection as a Republican. I’m not expecting her to but if she did I would not be surprised. She is a thorn in Schumer’s side so he could find someone to primary her. If that happens, she might decide to make the switch. But Schumer might want to keep that seat in Democratic hands which is them difference between control and losing control.

She is against eliminating the filibuster, packing the  courts and Biden’s infrastructure plan. All could fail if they lose her vote. And let’s not forget Sen Joe Machin. He is almost as big a thorn as Sinema unless he wimps out. Together they can stop anything Pelosi or Schumer try to do.

Throughout my life, the Democrats have had a really bad habit of being on the wrong side of things. During the Cold War, they were Soviet appeasers. In fact, the Democrats never had any problems with Russia until they wanted to blame Vladimir Putin for getting Donald Trump elected. Actual communist atrocities could be brushed aside, but a work of pure fiction drove them for three years.

Here in the 21st century, the Dems have been bending over backwards covering for terrorists. Sure, they spent about forty-five minutes after the 9/11 attacks being unified with real American interests, but they quickly pivoted to permanent Islamo-appeasement mode. They ignore the consistent Jihadist component to terrorist attacks and mass shootings but 10 drunk Q Anon guys on January 6 at the Capitol constitute the biggest existential threat to America.

Come on Kyrsten Sinema, how do you really feel about the Democratic party?

.@POTUS + @SecBlinken: If you support a cease-fire, then get out of the way of the U.N. Security Council and join other countries in demanding it.

Apartheid-in-chief Netanyahu will not listen to anyone asking nicely. He commits war crimes and openly violates international law. https://t.co/KuDSbFStBv

I’d love to say that Rashida Tlaib was art of the fringe of the Democratic party but she is actually very mainstream now. Kyrsten Sinema is the current fringe of the party. 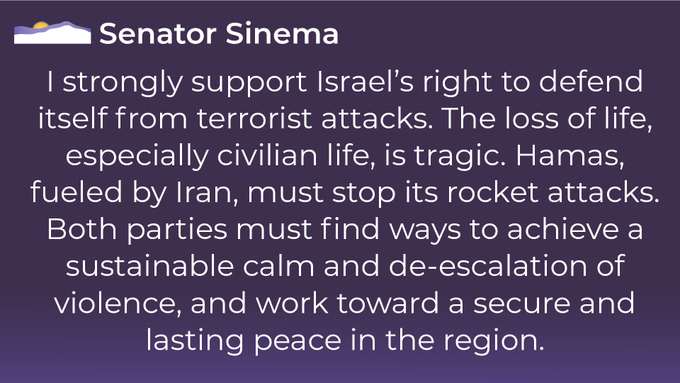 She’s not going to be invited to Squad happy hours anytime soon.  She committed the double Democrat sin of supporting Israel and acknowledging that Hamas is a terrorist organization.

I wrote at the beginning of the month that Sinema not only has a gift for annoying her fellow Democrats, but she will to keep on doing it. A moderate Democrat could very well end up being the most important Republican in the Senate for a while. Don’t put your money on Joe Manchin; he doesn’t have one-tenth the backbone that Sinema does.