Anne Applebaum and Peter Pomerantsev published a piece at The Atlantic that calls for conservative speech to be banned from the internet because of what they call disinformation. That is funny coming from Applebaum considering she was one of the leading propagandists pushing the fake Russian collusion hoax. That is either the worst or the second-worst political scandal this country has ever seen.

The pair quoted Alexis de Tocqueville on Democracy in America to introduce this most un-American idea.

This country was founded on free speech and indeed when writing the Bill of Rights, the Founders made free speech number one and gun rights number two.

The Second Amendment makes the First Amendment possible. As we have seen in the past, dictatorships always follow three rules. Eliminate free speech, guns, and religion.

All three are under attack today in this country. Unfortunately, the current Supreme Court cannot be depended on to defend any of these rights even though theoretically conservatives lead liberals 6 to 3.

“An internet that promotes democratic values instead of destroying them—that makes conversation better instead of worse—lies within our grasp.”

Applebaum condemns Chinese internet censorship. But in the very next breath, she shows her support for communist-style censorship of the media and the internet. Her ideas do not support democracy but rather seek to impose authoritarian censorship of competing ideas.

A true democracy allows for all factions to express their beliefs and then leaves it to the people to decide which is best.

In the surreal interregnum that followed the 2020 election, the price of America’s refusal to reform its internet suddenly became very high. Then-President Donald Trump and his supporters pushed out an entirely false narrative of electoral fraud. Those claims were reinforced on extreme-right television channels, then repeated and amplified in cyberspace, creating an alternative reality inhabited by millions of people where Trump had indeed won.

QAnon—a conspiracy theory that had burst out of the subterranean internet and flooded onto platforms such as YouTube, Facebook, and Instagram, convincing millions that political elites are a cabal of globalist pedophiles—spilled into the real world and helped inspire the mobs that stormed the Capitol. Twitter made the extraordinary decision to ban the U.S. president for encouraging violence; the amount of election disinformation in circulation immediately dropped. [The Atlantic] 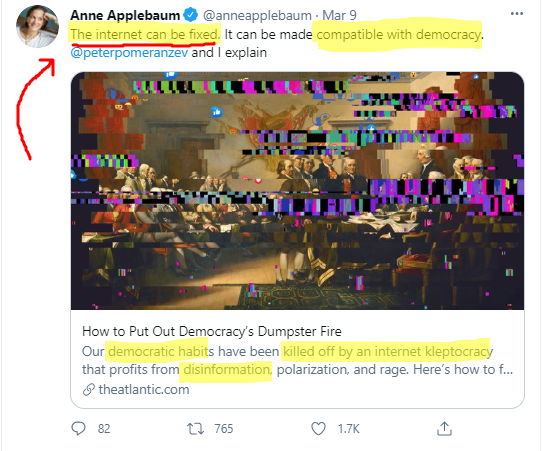